Marquettes began when a young twirler persuaded her parents and aunt to form their own troupe. She had been twirling for 4 years with a display only troupe and desperately wanted to begin competing. 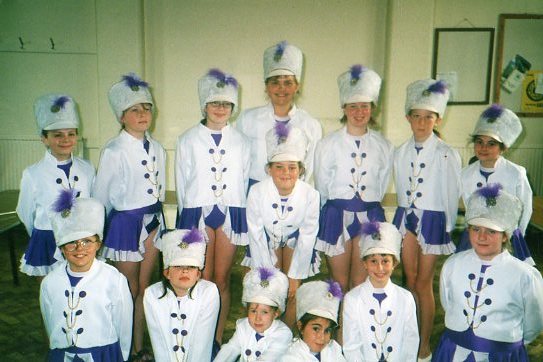 February 1999 was our first training session with 8 new girls and 2 former Littleport Lancettes. That year we trained to a basic level and performed at local fete's and carnivals using second hand equipment from the disbanded Townley Twirlers and costumes from the Fakenham Highlights Baton Twirlers.  We had planned our troupe colours to be claret and blue however, more by luck than judgement, our second hand uniforms were purple and white as were our pom poms, therefore these became our new troupes new colours. By 2013 we had finally fundraised enough to have the uniforms we always wanted!

In 2000 we met up with the Newmarket Hotshots who helped us get into the Open Competition circuit - in our first year we won our first two trophies.  Since then we have gone from strength to strength gaining new skills and entering more and more prestigious competitions. To date we have been national champions in Dance Twirl, Freestyle, Club Routine and Pom Pom.

In 2003 we won an opportunity award from the Kings Lynn & West Norfolk Borough Council for our all inclusive approach to sport regarding children with disability. A proud moment to be honoured by our community for  our hard work which we thank them for.  We also recieved a nomination for this award again in 2005, it was an honour to be nominated.

In 2003 we were also lucky enough to be asked to perform on a TV show called 'At Home On Their Own' where we were lucky enough to meet Tess Daly. It was a fantastic evening performing Pom Pom routines and cheering.  Thank you ITV for the oppurtunity.

From 2002 to 2004 our senior girls were given the oppurtunity to perform as part of a large troupe for the London New Years Day Parades. It was a fantastic experience meeting 100's of twirlers from all over the UK and other twirling groups from around the world. Thanks to the UKFM for allowing us to be part of that experience.  It is unfortunate that there is no longer a British group of twirlers in the parade.

Over the past 10 years we have tried out a few associations, some of them overlapping, before we found where we belonged.

In 2007 the BBTSA started its English National Squad programme, to date we have had 5 members qualify as part of the development squad.  In 2009 the first Marquettes member to compete as part of the England Team was Chelsea. They came 3rd at the British Opens in Edinburgh.

We have had the fantastic opportunity to take part in the week long baton twirling camp hosted by the BBTSA.  We get the chance to train with some of the world top Twirlers such as Jennifer Marcus, Seishi Ingenacki and Monica Lee (Youtube these names to learn more!) as well as training under the UK's top trainers competing for national troupe titles, taking (and passing) our Exams and working hard towards obtaining the coveted SPIRIT AWARD (we've had three members of this troupe win them).  All this and extra Marquettes only activities in the evening such as Cinema Night, Pizza Hut, Games Night (lazer shooting/swimming/amusements etc) and of course the PAMPERING EVENING!

In 2014 we became the official cheerleaders for the CWA Fury basketball team at the home games at Lynnsport in Kings Lynn. We get the crowd going and entertain during the timeouts and during half time. Make sure to catch the next home game to see more, its only £5 for the entry and well worth every penny! (plus every extra spectator we take earns us more donations from the door!)

During the summer we take part in festivals, fetes and carnivals in our local area. If you would like to book us for a performance please email [email protected] or call us o 01366 377 009. Every donation and fundraising event we can be a part of helps us to keep our club going! Thanks!